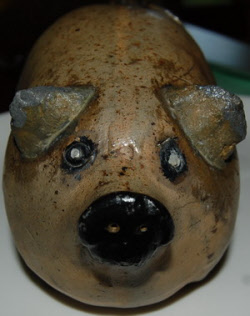 The incredible pottery stoneware Hermann figural pig bottle is truly one of the premier Wisconsin bottles of any style, shape or form. The absolute unexpected/undiscovered after 135 (or more) years antique Milwaukee pig bottle make this pottery pig worthy of the Wisconsin antique bottle hall of fame. It has to be noted; this little piggy nearly ended up in a modern day landfill! With its austere facial expression, the Herman Milwaukee stoneware pig, hails singularly as the only stamped, "Hermann Co Milwaukee" bottle ever found. This pottery pig bottle is spectacular in every regard.

The Stoneware Hermann Milwaukee Wisconsin pottery pig stands about three and a half inches tall. Tip of snout to tail end of pour spout, piglet is eight inches long. Across its broad shouldered stoneware pig back the Herman Milwaukee pottery pig is three and one quarter inches wide. A beautiful mixture of grey and tan salt glaze with dark brown accented glaze makes this pig particularly spectacular. The Milwaukee pottery pig's ears are free form, hand made and applied. This stoneware pig's three inch tail is free form, hand applied AND oh so crude!!! The tail, ears and ‘free hand' tooled eyes, mouth and snout make this Hermann Milwaukee pottery pig bottle a wonderful folk art piece. The potter/artist even left a number of finger prints in the base of the pottery pig while working the pig's clay belly for posterity's sake.

Is the Milwaukee pottery pig a one of a kind, ‘knockoff,' styled after the famous Anna pottery pigs, at lunch hour, by a playful Hermann pottery works employee? If you are hoping to find your own Hermann Milwaukee pottery pig, it is heartening to note; the sides of THIS little piggy were pressed in a mold, put together and then the mold seam was worked out by hand. Mr. Piggy simply has to be one of a group or production run.

Pigs were a sign of prosperity in the 1870ish era. Pigs were fed corn. Corn was used in the distilling of whiskey. Distillers played on the popularity of pigs with figural pig bottles. The pig also represented the evils of alcohol during the temperance movement. Corking the tail end of the pig was the ultimate marketing joke in the 1870ish era. The famous Anna Illinois pottery works railroad pigs are known to carry silly slogans like, "Something Good in a Hog's --->" (Arrow pointing to the rear) While not marked so elaborately, this little Milwaukee Wisconsin pig is hog wild! 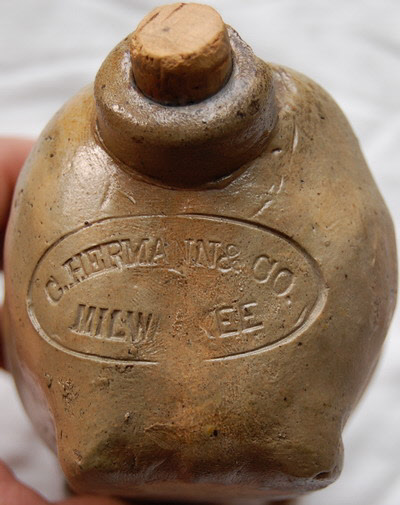 Charles Hermann was listed as a potter with his factory on Johnson Street, near the Milwaukee River, in 1856. Charles Hermann was also a grocer with a store located at 318 East Water Street. Hermann's stepson, Louis Pierron, became a partner in the firm in 1882, and in 1886 became the sole owner. Charles Hermann died on September 23rd 1892.

During Charles Hermann's thirty years operating his Milwaukee stoneware factory, Hermann imported clay from Ohio and Illinois to manufacture his crocks, jugs, churns, jars and jars with handle. Other products were probably made and many suspected, yet unmarked, pieces exist. Only this pottery pig is known outside of the ‘typical' potter's works, to exist, with the Hermann oval potter's stamp.

Marked Hermann's stoneware pieces are impressed by an oval stamp in which the words, "C HERMANN CO MILWAUKEE are emblazoned. This oval is found on the shoulder of stoneware jugs, under the rim of stoneware crocks and churns, at the base of stoneware jars and some stoneware jugs AND on the hind quarters of one, spectacular, Milwaukee Stoneware pig bottle.

While there are anomalies, Hermann jug handles typically terminate in a fish tail shape.

Hermann pottery pieces are most commonly found with gray and tan slat glazes. Glossy glazes in dark brown, light cream and dark green were occasionally used on Herman stoneware too. Interiors are coated with a dark brown Albany slip glaze.

Many Hermann crocks, jugs and churns have cobalt blue floral decoration. Some are so similar the same artist must have decorated the pieces. Many Hermann Milwaukee stoneware pieces have no decoration at all. Crocks and Churns with bird designs are among the rarest Hermann stoneware. One of the most famous being the "Hermann triple bird."

Hermann is known to have made containers for merchants of whiskey, (stoneware pig?) molasses, mustard, pickles and for wholesale drugs, since jars of his pottery works are found with the merchant's name stenciled on them. Clay beer bottles are also attributed to the Milwaukee Hermann pottery works, having the brewer's name impressed into the pre fired clay. The Herman Milwaukee Pig is the only stoneware 'bottle' to carry the Hermann pottery works mark.