There was a historic old Milwaukee stoneware factory with three little pigs, and they had made them to advertise their wares while dispensing whiskey, so they sent them out to seek their fortunes. The first, named Hermann, that went off met a man with a bundle of straw, and said to him, "Please, man, give me that straw to build me a house." Which the man did, and the little stoneware pig built a house with it.

Presently came along a deep cobalt blue wolf, and knocked at the door, and said, "Little pig, little pig, let me come in."

To which the pig answered, "No, no, by the hair of my chiny chin chin."

The second little stoneware pig, named Hermann too, met a man with a bundle of sticks, and said, "Please, man, give me those sticks to build a house." Which the man did, and the pig built his house.

Then along came the wolf, and said, "Little pig, little pig, let me come in."

The third little stoneware pig, who shall remain nameless, met a man with a load of Milwaukee made Cream City bricks, and said, "Please, man, give me those bricks to build a house with." So the man gave him the bricks, and he built his house with them.

"Where?" said the little pig.

"Oh, in Mr. Peter Barth’s place, and if you will be ready tomorrow morning I’ll call for you, and we will go together and get our fill." 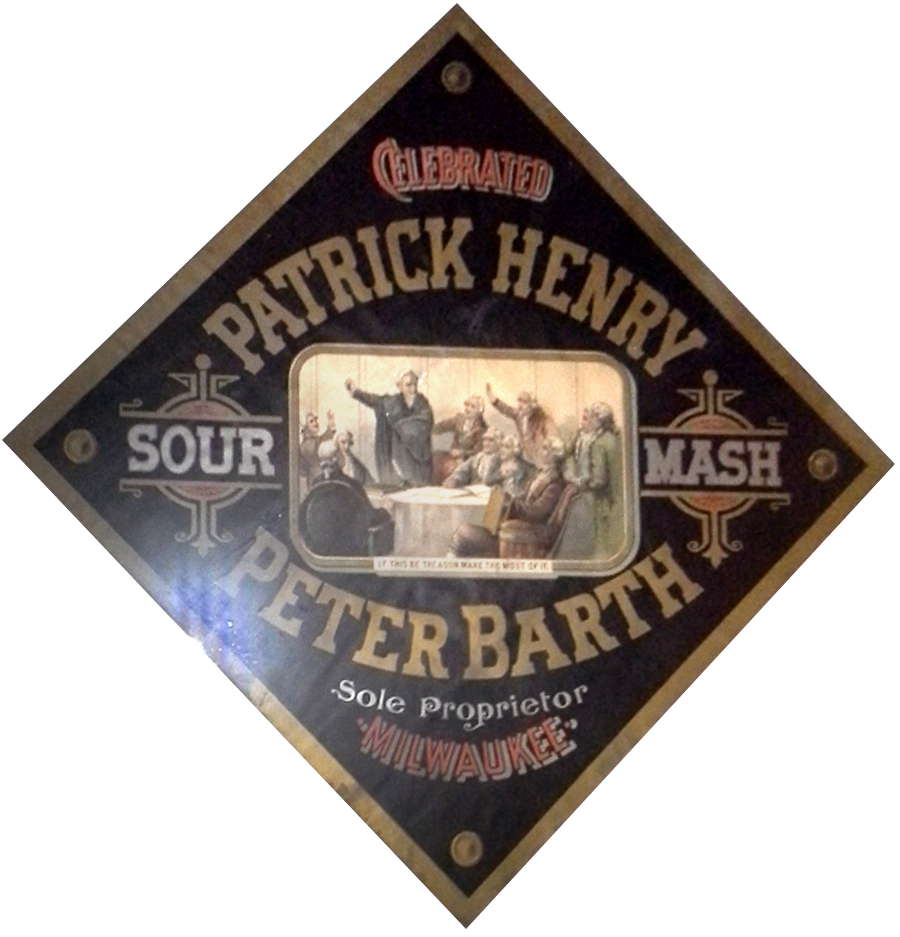 "Very well," said the little pig, "I will be ready. What time do you mean to go?"

Well, the little pig got up at five, and got Barth’s whiskey before the wolf came (which he did about six) and who said, "Little pig, are you ready?"

The little pig said, "Ready! I have been and come back again, and got a nice bellyful of Barth’s spirits."

The wolf felt very angry at this, but thought that he would be up to the little pig somehow or other, so he said, "Little pig, I know where there is an aged bourbon."

"Down at M. Block’s Retail and Wholesale Liquor Dealers," replied the wolf, "and if you will not deceive me I will come for you, at five o'clock tomorrow and we can get some fine old aged bourbon."

Well, the little pig bustled up the next morning at four o'clock, and went off for Block’s bourbon, hoping to get back before the wolf came; but he had further to go, and had to wait in line for the popular aged spirit, so that just as he was filled and leaving, he saw the wolf coming, which, as you may suppose, frightened him very much.

When the wolf came up he said, "Little pig, what! Are you here before me? Is it a FINE old aged bourbon?"

"Yes, very," said the little pig. "I will give you a sip." The wolf ever so slightly nipped his deep cobalt ear as he turned to give the wolf a sip. Clenching in pain the pig squirted a splash of fine old bourbon out his spout right into the wolf’s eyes. As the wolf splashed water from the horse troth on the side of the road into his eyes, the little pig jumped away and ran home.

The next day the wolf came again, and said to the little pig, "Little pig, there is a fair in Milwaukee this afternoon. Will you go?"

"At three," said the wolf. So the little pig went off before the time as usual, and got to the fair, and bought a butter churn with a beautiful Hermann cobalt  bird decoration, which he was going home with, when he saw the wolf coming. Then he could not tell what to do. So he got into the churn to hide, and by so doing turned it around, and it rolled down the hill with the pig in it, which frightened the wolf so much, that he ran home without going to the fair. He went to the pig's house, and told him how frightened he had been by a great round thing which came down the hill past him. 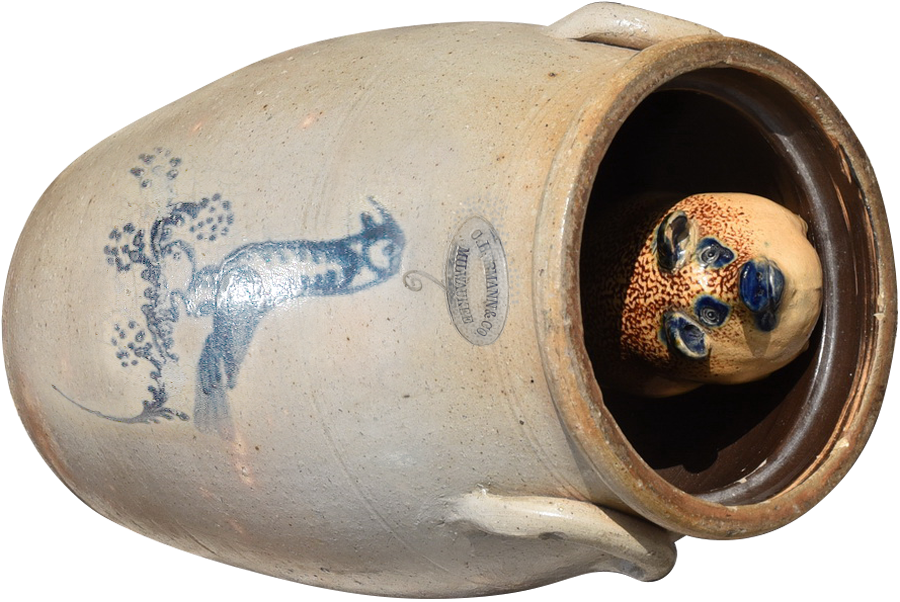 Then the little pig said, "Ha, I frightened you, then. I had been to the fair and bought a Hermann bird butter churn, and when I saw you, I got into it, and rolled down the hill."

Then the wolf was very angry indeed, and declared he would eat up the little pig, and that he would get down the cream city brick chimney after him. When the little pig saw what he was about, he hung on the pot full of water, and made up a blazing fire, and, just as the wolf was coming down, took off the cover, and in fell the wolf; so the little pig put on the cover again in an instant, boiled him up, and ate him for supper while savoring a fine old aged Block bourbon whiskey and lived happily ever afterwards.

These three little pigs make up every known figural Wisconsin stoneware bottle. They are incredible rarities and all three must be considered the rarest of the rare. The unmarked Hermann pig found in the 1980’s at a Milwaukee area estate sale is clearly the exact same mold. What he lacks in debossing he makes up for with deeper cobalt and beautiful glaze including a turkey dropping on the right shoulder. The second debossed pig was found in Washington State in the 1960s and has been a cherished family heirloom ever since. Thanks to Billie and Jean for sending Hermann number two home. Thanks John for sending Hermann number three home.

Playing the part of our Wolf is a cobalt blue Wolf & Seward, Milwaukee Hutchinson soda found in Pewaukee Lake by the author. Thanks to Jon Steiner for images of his Barth and Block advertising pieces acquired from the member’s only galleries at wisantique.com, worth the price of club membership alone.

Keep your eyes peeled for the true history of the second two Hermann stoneware pigs.

Incredible three dimensional motion images, called spinners, of two of the three pigs are available for your pleasure at the Wisconsin Antique and Advertising Club Site. www.wisantique.com. If you love Wisconsin stoneware, Wisconsin antique bottles and Wisconsin Advertising the WA&AC is a community where you are welcome and where you belong. Please consider joining while you enjoy Spinners. AND while you there, why not check out our other characters in this story the Bloch and Barth whiskey flask spinners in the whiskey Spinner gallery too?

Supporting the WA&AC through membership WILL help you improve your collection while helping to promote the appreciation of Wisconsin’s history and the objects that recall it.  JOIN NOW!!!